Henry Young is one of my favourite Australian silversmiths.  I'm always keeping an eye out for pieces of his to buy for my own collection (let me know if you have any to sell!).  He had a unique style of engraving his wares, from serviette rings through to large trophies.


Thomas Young, the father of Henry Young, founded his business in 1854 and by 1865 was trading as Thomas Young and Son at 47 Stephen Street, Melbourne.


I haven't seen any pieces of silver bearing a mark for Thomas Young, only for Henry.


As you can see from the example above, he often had his silver engraved with Australian animals.  In this case kangaroos and a possum.  I have also seen swans and lyrebirds on his pieces.
antique silver antiques Australian silver australiana melbourne napkin rings young

Popular posts from this blog

January 30, 2017
Antique Scottish Provincial silver is one of the most interesting and confusing areas of silver collecting. There were numerous towns that were producing silver in the eighteenth and nineteenth centuries. There were no regulations governing these towns, so each town (or silversmith) came up with their own marks. These were often related to town symbols or coat of arms. It is often the question of rarity that wildly affects the value for these pieces of silver. Below is a table of suggested rarity: Scarce Rare Very Rare Aberdeen Arbroath Cupar Dumfries Ballater Ellon Dundee Banff Fochabers Glasgow (pre-Assay office) Canongate Forres Inverness Elgin Leith Perth Greenock Nairn Iona Peterhead Montrose St. Andrews Paisley Stonehaven Tain Wick This list is published by antiquesilverspoons.co.uk and is based on the research of Richard Turner (who's book, A Directory of Scottish Provincial Silversmiths and Their Ma
Read more

Did you know that there have been women silversmiths for hundreds of years?   Women have been noted as silversmiths for hundreds of years.  Widows would often continue on the business of their husbands (often placing their maker's mark in a lozenge) and daughters would enter business partnerships with relatives also in the trade.  Dorothy Langlands was a widow who continued business for 10 years after her husbands death.   For sixty years the Langlands family were the largest manufacturers of silverware in Newcastle, England.   Dorothy Langlands  was the wife of John Langlands II and she took over her husband's business in 1804 when he died. She retired in 1814 and died in 1845.  This means we can date all silver marked with her maker's mark (D.L) to 1804-1814.  This is helpful because a lot of smaller silver items would not have been stamped with the date letter.   Below are two examples of her work.  A nice pair of bright-cut sugar tongs and a set of four Old E
Read more 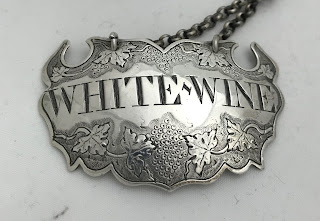 Wine labels (also known as bottle tickets), are a popular collecting area. The earliest form - an Escutcheon label by Louis Hamon, circa 1750 With my main interest being in antique sterling silver, I have focussed on labels made from the precious metal. They can also be found made from other things such as mother of pearl and porcelain.  Early collectors, such as Dr N. Penzer suggested 20 categories for labels. The Wine Label Circle, which is a collecting club for those interested in wine and sauce labels, reclassifies the categories, dividing the types of labels into 23 different categories in their authoritative book, Wine Labels:1730-2003, a worldwide history.  These categories are helpful for the majority of labels, although there will always be exceptions that will fit in to two or more. The 23 categories listed are: Escutcheons Rectangles Scrolls Ovals Crescents Stars and Buttons Sun in Splendour Bottle Collars and Neck Rings Single Letters and Cut-out
Read more

SilverGuy
NSW, Australia
Antiques are a piece of history that will last for MANY lifetimes! They are also the ultimate in recycling!
Most of these items are for sale.